Islamabad, Pakistan – At least 85 people have been killed after an Airbus A320 passenger airliner crashed into a residential neighbourhood while on approach to the airport in the southern Pakistani city of Karachi, officials say.

There were at least 91 passengers on board the plane, according to an official passenger manifest shared with Al Jazeera by the officials.

Yousuf said the two survivors were being treated at the hospitals in Karachi, while 19 bodies have been identified so far.

At least six people who were on the ground when the airliner crashed into houses in the densely populated Model Colony area of Karachi, adjacent to the city’s international airport, were being treated for their injuries, she added.

“Our plane [an Airbus] A320 which was coming from Lahore to Karachi was on final approach,” said PIA chief Arshad Malik in a video message released after the crash.

“The last words we heard from our pilot were that there is a technical problem and he was told on final approach that he has both runways available to him to land on. But the pilot decided that he wanted to go around.”

The plane then rapidly lost altitude and crashed short of the runway into the Model Colony neighbourhood, witnesses told the local media.

Dense plumes of black smoke rose above houses in the narrow streets of the neighbourhood, with television footage showing several houses crushed from the impact of the aircraft.

Parts of the plane, including the emergency exit door, were seen strewn in the streets. 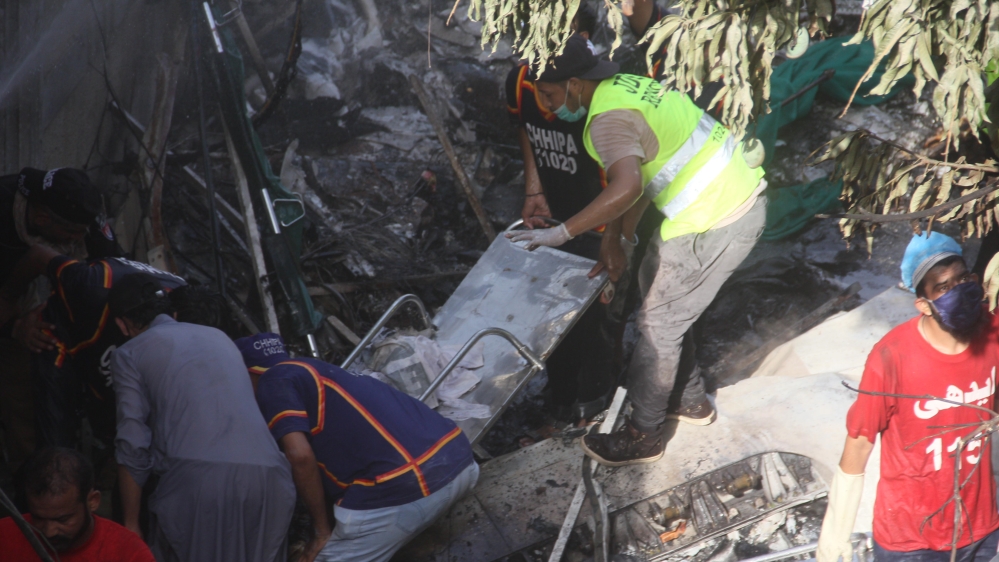 Pakistan’s military said it had deployed helicopters to assess the damage and help ferry the dead and wounded to the hospitals.

An emergency was declared in all of the city’s hospitals, already reeling from a widespread outbreak of the coronavirus, provincial health minister Azra Pechucho told reporters.

“We are doing DNA testing of the dead bodies so that they can be identified and they can be given to their families,” she said.

“We were already in an emergency situation due to COVID, we were already alert … and now we have put the surgical units on alert as well.”

Pakistan resumed limited domestic flight operations last week, after a lengthy suspension due to the coronavirus outbreak, which has claimed more than 1,067 lives in the South Asian nation, according to the government data.

The Airbus A320, operated by Pakistan’s national flag carrier, was due to land in Karachi at 2:45pm local time (09:45 GMT) after an hour and a half in the air after departing Lahore earlier in the day.

In 2016, Pakistan suffered its deadliest recent air crash, when all 47 people on board a PIA Embraeur ATR aircraft were killed when it crashed into a mountain en route from the northern town of Chitral to the capital Islamabad.

In 2010, the country saw its worst air disaster, with all 152 people on board an Air Blue passenger flight killed when the plane crashed into the hills just north of the capital Islamabad.

Libya: Tens of thousands of children at risk amidst violence and chaos of unrelenting conflict

NEW YORK, 17 January 2020 – “Children in Libya, including refugee and migrant children, continue to ..

Oil slumps 5%, US crude at its cheapest since March

Reuters
NEW YORK
Oil prices plunged about 5% on Thursday, with U.S. crude at its lowest since March,..

A journalist was shot dead during riots in Northern Ireland in what police Friday were treating as a..