As some states loosen lockdown restrictions in a bid to set the nation’s battered economy on the road to recovery, President Trump endorsed a state-by-state approach while predicting at a Fox News virtual town hall on Sunday that a coronavirus vaccine could be available by December.

Asked by MacCallum if he was concerned about the potential risks of accelerating a vaccine and human trials, Trump responded: “No, because they’re volunteers. They know what they’re getting into … They want to help the process.”

That timeline was dramatically ahead of previous estimates from both public and private sector experts at the outset of the pandemic, which had said a vaccine could take up to 18 months, if not longer. But, Dr. Anthony Fauci, director of the National Institute of Allergy and Infectious Diseases, said this weekend it was “doable if things fall in the right place” to have a vaccine by January.

Trump also predicted that the U.S. would be self-reliant on antibiotics, without needing to rely on China, within two years. Republicans have said it’s “crazy” that America is reliant on China, a communist adversary, for critical supplies including antibiotics. 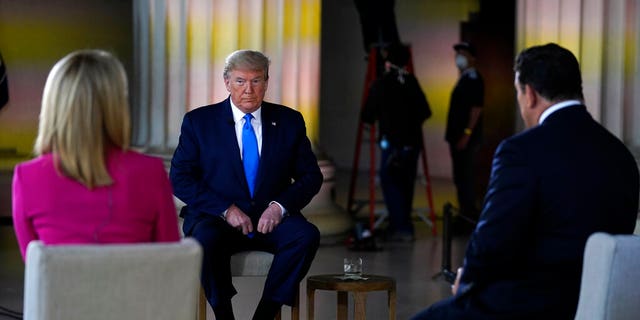 However, Trump predicted that as many as 100,000 Americans could die from the coronavirus, in a significant increase from his estimate of 60,000 last month. “Were going to lose anywhere from 75, 80 to 100,000 people,” Trump said, calling it a “horrible” situation. Without his administration’s actions, Trump asserted, “the minimum we would have lost was a million two, a million four, a million five, thats the minimum.”

Trump generally backed the efforts of America’s governors to manage the crisis, saying that each state will have a different approach to reopening their economies.

“It’s going to pass,” he assured, repeatedly referring to the outbreak as the “plague.”

Trump went on to assert that Democrats and media organizations, who have mocked him for touting the possible benefits of hydroxychloroquine in fighting coronavirus, were motivated by politics and “don’t want to see a good result.” Some media organizations even reported that an Arizona couple had consumed fish tank cleaner because they believed it contained hydroxychloroquine. The woman in that case had claimed she was following Trump’s advice despite openly attacking Trump on social media. Her husbands death after ingesting the liquid is now under investigation. 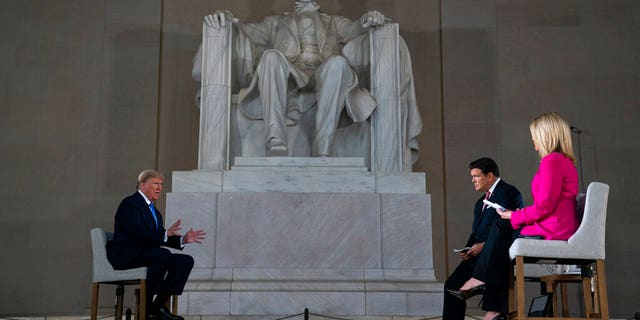 Trump has consistently acknowledged during White House coronavirus briefings, beginning on March 19, that hydroxychloroquine might not work but was worth trying in some patients, given preliminary studies showing possible promising results. New, non-rigorous data has called those indicators into question, however.

“I’m standing up there and instead of a normal question, the level of anger and hatred. I’ll look at them, I’ll say ‘what is your problem?” Trump said at the town hall, referring to how the media treated him during White House coronavirus briefings.

Joe Biden, media outlets and other Democrats, Trump pointed out, had initially characterized his January travel ban on China as xenophobic, before changing their tune. When Baier queried Trump about a recent Biden tweet saying Trump had left the U.S. “unprepared” for a pandemic, Trump was immediately dismissive.

“Joe Biden didn’t write that,” Trump said. “That was written by a young man who got very good grades at a very good school.” At a previous Fox News town hall in March, Trump similarly implied that Biden is no longer mentally competent.

China, Trump said, had conclusively misled the world on the spread of the coronavirus. “I think, personally, they made a horrible mistake, and they didn’t want to admit it,” Trump said. He added that China had misled the World Health Organization, for which Trump suspended funding earlier in the year for failing to warn the global community and simply parroting China’s claims about the virus.

“The World Health Organization has been a disaster,” Trump said. “Everything they’ve said was wrong. And they’re China-centric. They agree with China, whatever China wants to do. So our country, perhaps foolishly in retrospect, has been paying $450 million a year to the World Health Organization. And China’s been paying $38 million a year. … So I’ll have to make a decision on that. … They missed every single call.”

Politico reported Sunday, citing the Department of Homeland Security, that China delayed informing the WHO that the coronavirus was contagious until it could first stockpile masks and other critical equipment.

A research dossier compiled by the so-called “Five Eyes” intelligence alliance, that reportedly concludes China intentionally hid or destroyed evidence of the coronavirus pandemic, is consistent with U.S. findings about the origins of the outbreak so far, senior U.S. officials told Fox News on Saturday. Fox News was the first to report that sources were increasingly confident the virus likely had escaped from a laboratory in Wuhan, China, where the naturally occurring strain was being studied. The matter remains under investigation, however.

After what he called a “working weekend” at Camp David, Trump returned to the White House Sunday afternoon. The president has faced a cascading series of challenges in recent days, including protesters in Michigan storming the state capitol to protest stay-at-home orders, reports that North Korea’s leader was alive and healthy despite a CNN report that he was near death, and apparent discord within his administration as to the potential threat still posed by the coronavirus.

Asked by MacCallum whether he ever considers whether he went too far in pushing for a nationwide shutdown, Trump responded, “No, we did the right thing.” He added that millions of lives had been saved — but, he conceded, “I do look back on it.”

Trump said he has lost three friends due to the coronavirus: “This is a very advanced, very horrible thing we’re fighting. But, with all of that said, we’ve learned a lot about it. It affects older people. … This thing is vicious. And it can take you out. But children do very well. Young children do better than teens.”

At the same time, Trump said some states, including Virginia, aren’t opening up fast enough. He also took an apparent shot at California, where Gov. Gavin Newsom, a Democrat, ordered Orange County beaches — prompting hundreds of protesters to flood the city of Huntington Beach in protest.

The town hall came amid other whirlwind developments in Washington. Bombshell new disclosures by the Justice Department, for example, largely supported Trump’s claims that FBI officials furtively worked to target some of his former top officials.

Among other revelations, FBI communications made clear that top bureau officials discussed their motivations for interviewing former National Security Adviser Michael Flynn in the White House on January 24, 2017 — and openly questioned if their “goal” was “to get him to lie, so we can prosecute him or get him fired.”

Back in the White House, Trump tweeted Sunday that the intelligence community had vindicated him on another matter. 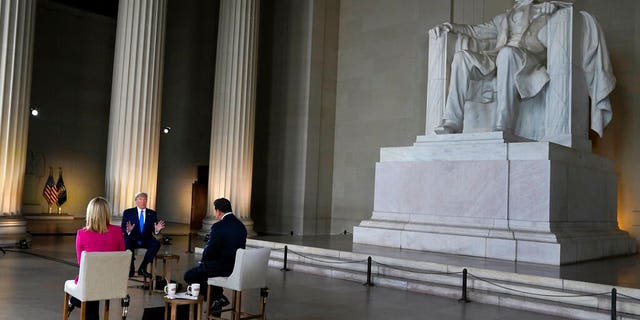 “Intelligence has just reported to me that I was correct, and that they did NOT bring up the CoronaVirus subject matter until late into January, just prior to my banning China from the U.S.,” Trump wrote, apparently contradicting an earlier report in The Washington Post. “Also, they only spoke of the Virus in a very non-threatening, or matter of fact, manner……Fake News got it wrong again, as always, and tens of thousands of lives were saved by my EARLY BAN of China into our Country. The people that were allowed were heavily scrutinized and tested U.S. citizens, and as such, I welcome them with open arms!”

Responding to a viewer question on the Post’s report on Sunday, Trump pointed out that top Democrats were opposing his measures to close down travel from China. Trump said that on Jan. 23, he had indeed received an intelligence report on the virus, but it indicated it wouldn’t be a major threat. Trump said intelligence materials would be released on Monday to substantiate his claim.

Politico had reported that the Trump administration held a briefing on the coronavirus for senators on Jan. 24, but it was “sparsely attended” in part because it “was held on the same day as a deadline for senators to submit their impeachment questions.”

Trump was joined later by Treasury Secretary Steve Mnuchin and Vice President Mike Pence, and the three emphasized that a payroll tax cut would be a necessary part of any future stimulus.

Mnuchin made clear that the White House was looking to “help states,” but not “bail out” any financial mismanagement. 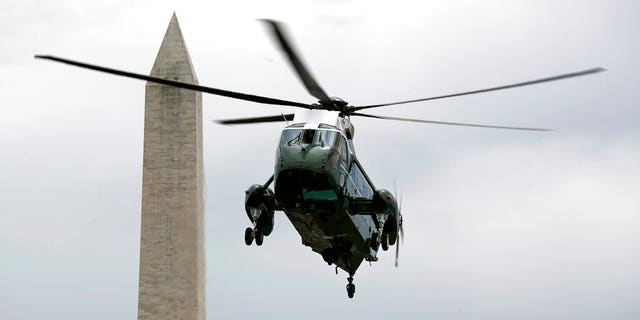 Marine One, with President Donald Trump aboard, approaches the South Lawn of the White House, Sunday, May 3, 2020, in Washington. Trump is returning from a trip to Camp David, Md. (AP Photo/Patrick Semansky)

Pence, meanwhile, admitted he had made a mistake during a recent hospital visit. “I should have worn the mask at the Mayo Clinic,” he said.

Trump’s appearance at the Lincoln Memorial was his first interview with Baier and MacCallum since the Fox News town hall in Scranton, Pa., on March 5.

But, the nation’s political and economic landscape has transformed dramatically in the several weeks since Trump’s last town hall, which featured an in-person audience in the early days of the coronavirus pandemic. Even then, Trump made sure to tout his decision to close most travel from China in January, even though Democrats and some media organizations initially characterized the move as xenophobic.

HOW THE MEDIA, DEMS HAVE CHANGED TUNE SINCE KAVANAUGH

“One of the things I did is, I closed down the borders to China and to other areas that are very badly affected and really having a lot of troubles — I mean, countries and areas of countries that have had a lot of problems,” Trump told an audience member at the March town hall. “And, I closed them down very early, against the advice of almost everybody, and weve been given rave reviews.”

Also at the March town hall, Trump touted his Gallup poll numbers, which showed relatively high marks for the administration’s coronavirus response. Those numbers rose six points in the last two weeks, according to the latest Gallup poll. 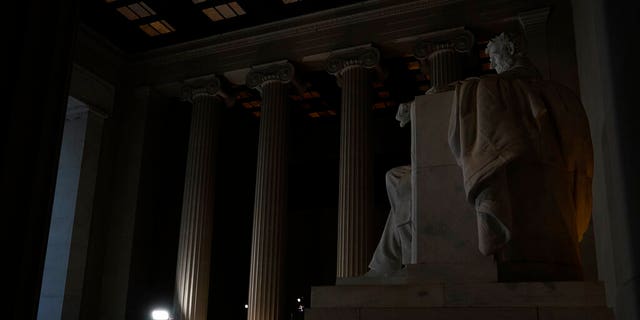 The new survey found 49 percent approved of the presidents job in office and 47 percent disapproved, a personal best with Gallup for Trump.

However, Fox News polls showed that Biden has remained a strong rival for Trump in the early days of the campaign, and has surged ahead in key states.

For now, though, Trump made clear he was focused on confronting the pandemic more than political considerations. Asked at the end of the town hall what he had told family members about the crisis, Trump sounded an optimistic note.

CRS BRACES FOR CYCLONE FANI IN INDIA AND BANGLADESH

As Cyclone Fani barrels toward India and Bangladesh, CRS prepares its response

International Conference In Qatar to End Impunity of War Criminals

Doha, Qatar – Seeking to find ways to hold individuals and countries accountable for war crimes and ..