The pair met during a taxi ride through Paris in 2004. Dibon, then 38 and a cosmetics and pharmaceutical specialist who split her time between Silicon Valley and the French capital, had grown curious about her driver's reading material.She wanted to know about the poetry book that lay by his side. Meridda, then 51, told her of his enthusiasm for literature and Dibon was captivated. "He was always reading, trying to get more cultured, more savvy. And she kind of respected and admired that, I guess," Dibon's sister, Helene de Ponsay, told CNN.Things moved quickly. Within a few weeks of meeting, they moved into an apartment in Courbevoie, just outside Paris.At the start of their relationship, her sister said, the couple seemed happy. But five years in, Meridda revealed a darker side, and became increasingly possessive and manipulative. De Ponsay remembers one visit with her sister in 2014 which left her worried."I went to her — to their — place one day to grab coffee and it was the end of the day, and she went into a sort of panic because she hadn't purchased bread. You know, what kind of a feminist woman would do that? And she was a feminist," de Ponsay recalled.Dibon also discovered that Meridda had lied about his past."He had lied about the fact that he was single, but he was married! He had lied about the fact that he didn't have children, but he had children!" said de Ponsay. Over the next decade, Dibon tried to break up with Meridda several times, her sister said. But leaving proved difficult. He often resorted to emotional blackmail and would stop eating in a bid to get her to stay. "She probably felt a bit responsible for his mental health. She was worried that he would hurt himself," de Ponsay said. On the morning of April 22 — some 15 years after they met, and two days after she tried to leave him once and for all — Dibon's body was found stuffed in a suitcase floating in the Oise river in the suburbs of Paris. Versailles police said Meridda had drugged her and then smothered her to death. He spent two weeks on the run before killing himself.Dibon is one of at least 137 women in France to die at the hands of their partner in 2019, according to advocacy groups who track the issue. Last year the figure was 121, according to the government. The country's failure to come to grips with the crisis has sparked fury from critics who say France has a problem with misogyny, and led the government to announce a national debate on domestic violence.As activists prepare to hit the streets for a mass protest on November 23, ahead of the closing of that consultation, there is hope that their words will finally be heard, according to de Ponsay.

Since her death, Dibon's name has been plastered around Paris in tunnels, on buildings and bridges by Camille Lextray. She's a member of the feminist group Collages Feminicides.Their aim is to make visible the victims of "femicide" — the killing of women because they are women. Cases, which are usually perpetrated by men, are often committed by partners or ex-partners and involve ongoing abuse and threats, according to the World Health Organization."It's to highlight the fact that there's a problem in France: we still think that women belong to men," Lextray told CNN as she carefully prepared the glue for a poster that would be stuck to the Palais de Justice earlier this month. The femicide rate in France is higher than most countries in Europe. The most recent Eurostat data, from 2017, shows that more women were killed in France than in England, Italy, Spain or Switzerland. Only Germany had more.Marlene Schiappa, France's gender equality minister, believes culture is partly to blame."I think French society is deeply sexist and it's difficult to make it evolve," she told CNN. "With the government, I'm trying to win a cultural battle against sexism and misogyny, but it's true that it's very hard."Amid the public outcry over the growing problem of femicides in France, President Emmanuel Macron's government has taken several steps to tackle the issue."French women have been buried under our indifference," Prime Minister Edouard Philippe said in September before unveiling a raft of measures to combat domestic violence.Philippe pledged €5 million ($5.5 million) to create 1,000 more places in emergency accommodation for women who are victims of domestic violence. He also encouraged the appointment of specialized prosecutors and courts to handle cases of domestic violence more quickly, as well as an audit of the police's handling of domestic abuse cases.In the morning preceding Philippe's address, Macron paid a visit to a domestic violence hotline center where he listened in to a number of calls.One of those calls was from a 57-year-old woman, who had tried to report her violent husband for threatening to kill her. She also asked for help from a police officer in picking up her belongings from the home where her abuser still lived. The officer refused, saying it was "not part of the penal procedure." 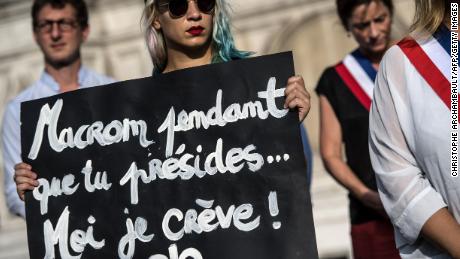 He was wrong. The French criminal code dictates that police are legally required to follow through on filed complaints, according to the national police. Following the incident an investigation was opened by the police."The way this victim's request was handled was totally flawed," a spokesman said."The failure to listen and the repeated reluctance to go is in total opposition with the rules regarding how victims should be received and how women in distress should be looked after."A review of 88 cases of marital murders or attempted killings of partners or ex-partners, revealed that for 65% of them the French authorities had been alerted, according to a report published by France's justice ministry earlier this month. 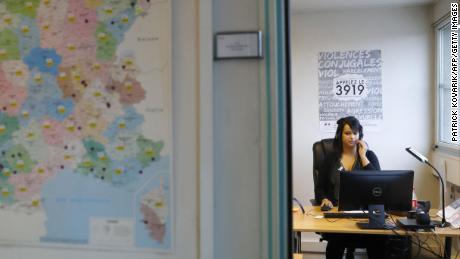 Julie Douib paid a heavy price because of police inaction. She was killed in March after her ex-partner fired two shots at her home in Corsica. Only a couple of days earlier, the 34-year-old had warned police that her ex-partner had a gun. Her father, Lucien Douib, said Julie had reported him to the police at least five times."They listened to us, but they did nothing," Douib told CNN. "Every time, we had to speak to a different person. If the police had protected my daughter, she would be alive today." Prime Minister Philippe spoke specifically about Julie Douib's case in September."Delays in dealing with cases of domestic violence are often unbearable. Not only does filing a complaint not protect the victim, but it is often the moment that exposes the victim the most," he said."Julie Douib, who was killed on March 3 by her ex-partner, filed several complaints. Her father, Lucien Douib, had also lodged several complaints. But as her husband had not killed her yet, despite his threats, and despite the regularity of the medical certificates she presented, his weapon was not removed."Contacted by CNN, Bastia's prosecutor said she wouldn't communicate on an ongoing investigation.

Caroline de Haas, a driving force in the "Nous Toutes" feminist pressure group recognizes that law enforcement must do more, but also says there needs to be major culture shift.She traces part of the problem to the 1804 Napoleonic code, which stated that women were inferior to men, laying a legal foundation to gender inequality."It comes from a long, long, long history of (male) domination in France," de Haas told CNN.The French language itself is also a tool of male domination, according to de Haas. French grammar rules give the masculine form of a noun precedence over the female."If you have one hundred women (a feminine noun) and one cat (a masculine noun) you say the word ("they" as a pronoun) in masculine. One hundred women and one cat. And the masculine form is superior. It's crazy!"Read More – Source

Europe will ‘die from inside’ if far-right populists triumph, top EU figure says

The leaders of the EU member states and of the European Union institutions sent a message of unity a..