That suggests serious shortcomings in where Saudi systems are placed and what they're designed to do. But it also illustrates a bigger problem: the age of drone warfare is a massive challenge to governments around the world. The cruise missiles used in the attacks were re-tooled versions of a Russian design from the 1970s — and drones are still the poor man's missile even if they are getting more sophisticated. In other words, 5% of global oil supply was taken out by weapons worth not even millions — let alone billions — of dollars.A US defense official told CNN that Saudi and US missile defense systems did not detect the launch nor engage the missiles. One reason was that much of the "missile defense architecture" is oriented toward Yemen from where Houthi forces have regularly fired missiles and drones over the past two years, the official said.In the aftermath of the attacks, US President Donald Trump has ordered new sanctions on Iran. While Trump has not definitely stated that Iran was behind the strikes, others in his administration have pinned blame on Tehran. Iran has denied responsibility for Saturday's attack.According to a source familiar with the Saudi/US investigation into the attacks, the cruise missiles flew at very low altitude to avoid detection and would have avoided traveling over the Persian Gulf where US and Saudi radar systems are strongest.The Saudis have dealt effectively with the barrage of short-range ballistic missiles fired from Yemen in the past two years. Saudi Defense Ministry spokesman Lt. Col. Turki al Malki told a news conference on Wednesday the Kingdom had intercepted more than 230 such missiles.But ballistic missiles, which leave and then re-enter the atmosphere, are not the current problem.Saudi Arabia has six battalions of US-made Patriot batteries designed to take out incoming missiles. Jeremy Binnie, Middle East editor at Jane's Defence Weekly, says that according to satellite imagery "the Saudis have shifted Patriots back to defend the eastern province, with one facing towards Iran, the other towards Yemen."Recently another was deployed just to the east of Abqaiq but again facing Yemen. But any cruise missile approaching from the north would have appeared only fleetingly — if at all — on its radar.Compounding the problem, Binnie says, is "Iran's development of cruise missiles with ranges that can exploit gaps. Saudi defenses were already stretched by the threat from Yemen and now these new Iranian weapons are opening up even more attack options."

A swarm of projectiles

The Kingdom announced plans in October 2017 to buy the Russian-made S-400 anti-missile system, which has a longer range than the Patriot. The S-400 is mainly designed to deal with ballistic missiles but can be combined with a smaller Russian system known as the Pantsir S1, which is designed to combat short-range cruise missiles and can also tackle drones.The Pantsir has both missiles and guns but Binnie says "there are suggestions — contrary to what the Russians say — that it has not performed that well in Syria."Saudi Arabia actually has a system — bought from Germany — to deal with short-range attacks, called the Skyguard. It's basically radar vans attached to anti-aircraft guns — but they have to be close to the target they are defending. According to Binnie, at least one Skyguard unit was deployed at Abqaiq. Michael Duitsman, a research associate at the James Martin Center for Nonproliferation Studies in Monterey, California says the radar — if operational — would have been trying to distinguish the projectiles from all sorts of ground 'clutter.' "The warning times were minimal — the drones would likely show up on the Skyguard radars two minutes or less before impact — if they showed up at all." 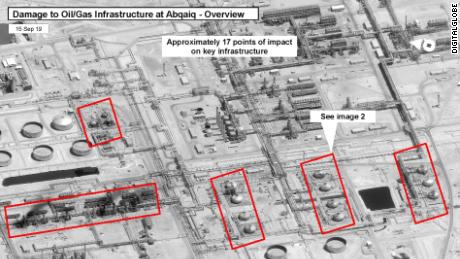 The trouble is that the air defenses at Abqaiq were designed to stop an attack by manned aircraft, Duitsman says. "The range at which most radar systems can detect a small drone or cruise missile is substantially less than the range at which they can detect a full-sized aircraft."According to Justin Bronk, research fellow at the Royal United Services Institute in London, the Skyguard has a "very limited range which restricts the area each battery can protect and can be swamped by multiple incoming threats at once, especially if approaching from different directions."That's the nightmare scenario for the Saudis and others: a swarm of such projectiles converging from multiple directions — some designed to confuse or jam radar and others to overwhelm air defenses. And it can be done cheaply.Bronk told CNN that "the cost curve is very favorable to the attacker, meaning Saudi Arabia would have to spend far more than its enemies to protect against additional strike capabilities. As Read More – Source

Yet, in a sign of the seriousness of the crisis unfolding in northeastern Syria, the two British mem..

THE INTERVIEW © FRANCE 24
By: Mirna JAMMAL