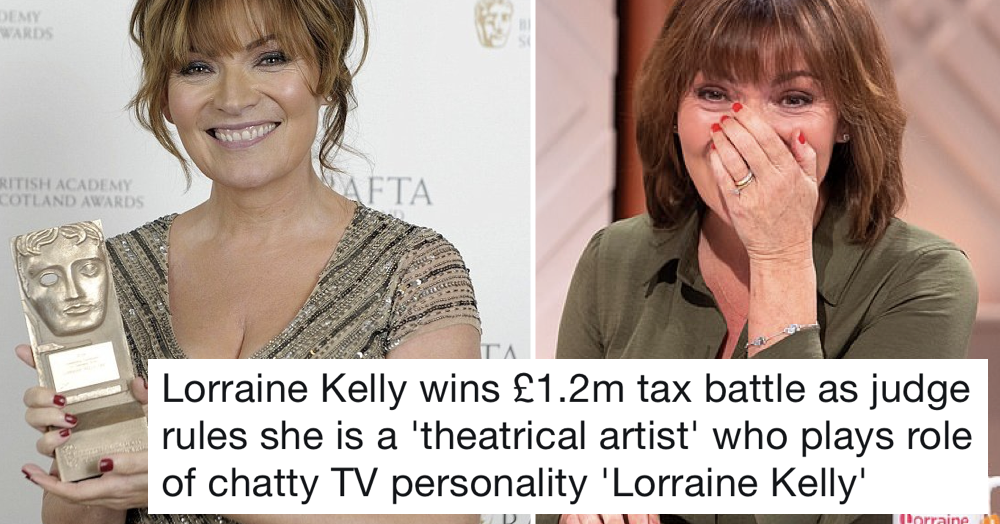 Heres a story to take your mind off Brexit for a moment or two.

Lorraine Kelly has won a massive legal case over an unpaid tax bill by arguing that she does not appear on TV as herself, but is instead an actor playing a cheery upbeat character called “Lorraine Kelly”.

And its melting peoples brains.

I love this story: Lorraine Kelly has won a massive legal case over unpaid tax by arguing she does not appear on TV as herself, but is instead an actor playing a cheery upbeat character called “Lorraine Kelly”. https://t.co/Devr2p2mTj

The breakfast TV presenter Lorraine Kelly is performing the role “of a friendly, chatty and fun personality” when she appears on ITV each morning and not simply appearing as herself, a tax tribunal judge has ruled.

The presenter of the magazine show Lorraine “presents a persona of herself”, Judge Jennifer Dean ruled, and as such can be described as a “theatrical artist”, meaning payments to an agent were allowed as a tax deductible expense.

“We did not accept that Ms Kelly simply appeared as herself; we were satisfied that Ms Kelly presents a persona of herself,” Deans ruling stated.

TFW when youve just won a £1.2m tax case but youre feeling typecast in the role and want to hand over to a new actor but are never, ever going to be allowed to stop playing a cheery upbeat character. pic.twitter.com/zYLyqmK12T

We have a feeling this one is going to run and run. But just for starters, here are 9 of our favourite responses so far.

Whoah, this is some super post-modern shit. https://t.co/LHYVoQMQoi

actually lorraine kelly is the name of the scientist

I think its time for a black actor to be given a try as Lorraine Kelly. Itll upset plenty of hardline fans wholl say its not canon, but times change

And the BAFTA goes to…

I faked an orgasm once, does that mean Im now an actress who doesnt need to pay taxes? #LorraineKelly

So thats why she says everything is “really, really great”. Shes acting. Now it all becomes clear.

I do not appear at work as myself but as a person who acts interested. Can i not pay my taxes also?

The woman reported to police in November last year that the man, whom she had never before met, had ..

From my songs, people assumed Im a sad, tortured soul. So Im glad I started this column

Its my five-year anniversary here. Five years of writing this column every two weeks. I still cant q..

Sex attacker, 25, broke into elderly womans house and licked her skin while molesting her

A 25 year-old sex attacker broke into an elderly womans home and licked her skin as he tried to pull..

Homecoming shows, more than ever, that none of us can be Beyoncé

None of us can be Beyoncé. I was more aware of this than ever in the run up to Homecoming, when Netf..