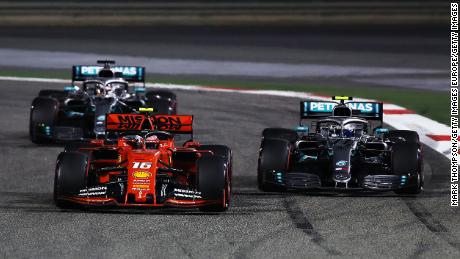 "I had a plastic bag stuck on my front wing at some point, which was costing performance," the championship leader revealed after the race."So not the perfect race but in the end, luck was on our side and we'll definitely take it — especially me, after all the bad luck last year. "Obviously hard luck for Charles, he was very strong — but it will come for him. I had to wait for more than 80 races for my first win, so I'm sure it's going to be okay."READ: Leclerc's brother to test drive with Formula E

Leclerc, who started the race in pole, was hit by engine problems when his car's hybrid system failed. He'd been eight seconds ahead of Hamilton at one stage, but the Briton quickly closed as Leclerc's Ferrari faltered before sweeping past the 21-year-old Monegasque's Ferrari.It was a sign of the youngster's maturity to acknowledge the team being "lucky in a very unlucky situation," recognizing that he would have finished even lower down the grid had the race not ended under the safety car for just the eighth time in F1 history."It happens," Leclerc told reporters after the race. "It's part of motor sport. It's a very hard one to take, but I am sure we will come back stronger."Unfortunately today it was not our day, but I am confident. The team has done an amazing job to recover the lack of pace we had in Australia."What to say? Of course I'm extremely disappointed, like the whole team, but it happens in the seasons."The good news for Leclerc is that he took his first podium finish in F1, while also scoring a point for recording the fastest lap. At the moment he's also looking the more effective Ferrari driver.

Chelsea midfielder Danny Drinkwater has been trolled mercilessly online for the unfortunate irony of..

The Tokyo Olympic marathon will begin at 6am local time

One of the competitors in the marathon in Atlanta in 1996. The race began at 7am local time and temp..

The UFC will step in to mediate in an “unacceptable” social media exchange between two infamous mixe..

'Not easy to share faith in the public sphere': Gary Ablett.Credit:Morgan Hancock

Melbourne Storm prop Christian Welch says his side must be ready to face “13 forwards” when they hos..