Resident Behailu Kebede "acted quickly and instinctively" after being woken by a smoke alarm in the early hours of June 14 last year, his lawyer Rajiv Menon told the inquiry into the blaze that killed 72 people.The fire is believed to have started in Kebede's Hotpoint fridge freezer, located in his kitchen.After hearing the smoke alarm, Kebede called emergency services and banged on each of his fourth-floor neighbors' doors shouting "fire!" said Menon.Kebede then returned to Flat 16, turned off the main electricity switch in the hallway, put on some trousers and left the building barefoot, carrying only the mobile phone on which he was calling emergency services, Menon told the hearing.He left without his wallet or the keys to his apartment and car, added Menon, contrary to media reports at the time that claimed Kebede packed a suitcase and escaped without raising the alarm."A nasty lie that was first reported in the days after the fire and sadly continues to be pedaled nearly a year later," said Menon.

Kebede, who had lived in the West London tower for 25 years after moving from his native Ethiopia, was subsequently hounded by journalists and offered witness protection by police concerned for his safety.He has since suffered health problems, which Menon did not elaborate on, and was said to be "terrified" of appearing at the hearing."It is important to stand against all the garbage that has been written," said Menon, adding that "Kebede is a significant witness in the police investigation, not a criminal suspect."The lawyer said Kebede "did exactly what any Grenfell fire resident who discovered a fire in their flat were told to, by the fire action notice posted outside the lift.""To his enormous credit he also made sure that everybody else on the fourth floor had been warned about the fire, and only when he believed that nobody else was left on the floor did he himself leave and make his way downstairs," Menon added.

The inquiry, chaired by retired judge Sir Martin Moore-Bick, is tasked with establishing what happened at Grenfell and making recommendations to prevent a similar fire from causing such devastation again.On Monday the inquiry heard that a litany of failings, including a controversial "stay put" policy and combustible cladding, contributed to a catastrophic loss of life at Grenfell. The fire was the deadliest in the United Kingdom since 1988.A report by fire-safety engineer Barbara Lane highlighted a "culture of non-compliance at Grenfell Tower." Among her findings were that firefighters were unable to get enough water up to the higher levels of the 24-story building, partly because the building was fitted with a noncompliant dry main, rather than a regulation-required wet main that could have provided more water. 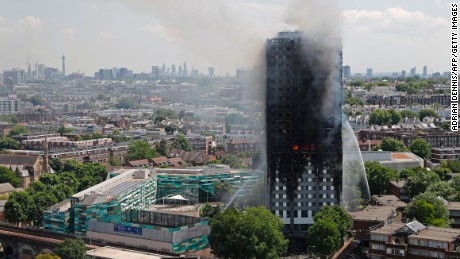 Last month the inquiry also heard heart-rending tributes from bereaved families who lost loved ones, including Marcio Gomes, who told of the devastation of losing his unborn son hours after he and his family escaped the inferno.His pregnant wife, Andreia Gomes, was put in an induced coma after the couple and their two young daughters ran from the 21st floor of the building at four in the morning. She gave birth hours later to a stillborn baby, whom they named Logan.Grenfell Tower sits in the affluent London borough of Kensington and Chelsea, but many of its residents were low-income earners living in social housing.

Work begins to clean up areas of Salisbury after Skripal poisoning

How 5G could change everything