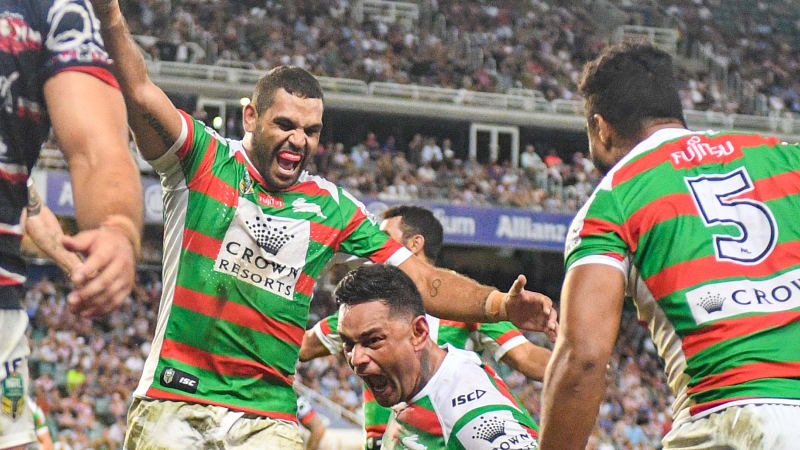 He admitted just this week he was ''embarrassed'' when younger St George Illawarra rival Euan Aitken got around him with ease to score a try.

But the skipper stood up flashing his pink mouthguard when he scored, and was overheard cheering when he thought he had a second later in the half, only to be held up over the line.

This was a brilliant effort by Souths, who enjoyed plenty of early possession and made simple metres up the middle.

They will be tough to beat when they host Caberra on the Central Coast next Saturday.

The star-studded Roosters, who were short-priced premiership favourites before a ball was kicked, crashed to their third defeat of the season.

George Burgess ran the ball with purpose while Cook was electric out of dummy-half.

Blues coach Brad Fittler was on the sidelines for Channel Nine and would have loved what he saw from a potential Origin rake.

The fairytales looked like starting as early as the seventh minute when Cook charged up field and passed to Jason Clark to race 40m and score a try in his 150th game.

But the distance was too far for Clark who threw the ball almost immediately back to his zippy hooker.

It was some Tedesco and Latrell Mitchell magic that put the Roosters suddenly in front midway through the first half.

Tedesco motored down field before he was tackled by Alex Johnston, then the ball found Mitchell the next play.

The 20-year-old powerhouse centre – often referred to as a younger GI – skipped past Dane Gagai and then somehow evaded the attention of Souths winger Richie Kennar to leap in the air, get skewed sideways before planting the ball down with his left hand.

He punched the air to celebrate as the Allianz crowd – and most of Mitchell's teammates – realised they were somehow in the lead.

But it was short lived as Souths had one of their own through Rob Jennings before the break. It was a regulation try that was again started by a darting run out of dummy-half by Cook.

Souths posted two tries straight after half-time from Reynolds bombs, including an as-easy-as-they-come try for future Roosters Angus Crichton who was on the spot to mop up a bobble from Tedesco.

Then Inglis came to the party and could not contain his joy.

The Roosters suffered a blow before kick-off when Sio Siua Taukeiaho hobbled up the tunnel during warm-up and was a late scratching. Jared Waerea-Hargreaves was promoted to the starting side and dropped the ball cold in the second minute.

Fellow Roosters enforcer Dylan Napa put a giant shoulder charge on John Sutton and could be forced to spend a bit of time on the sidelines moving forward.

Victor Radley produced an equally bone-jarring – but legal – tackle that flung Mark Nicholls' head flying back later in the half.

Browns’ Jackson: team still undecided on QB for No. 1 pick